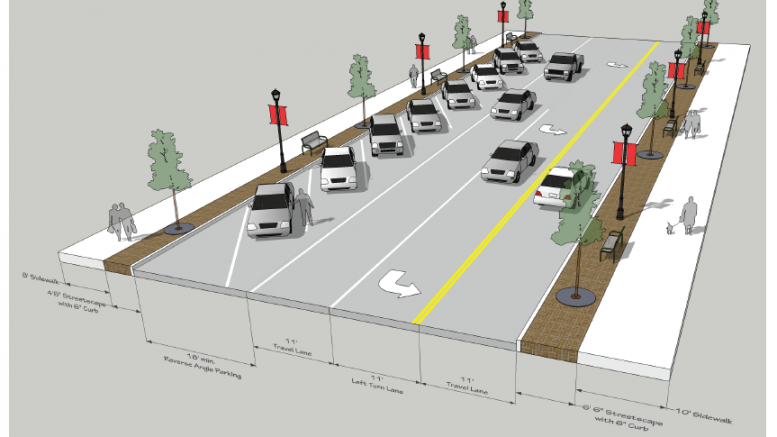 Connecting the growing Entertainment District, the University of Texas at Arlington, the Cultural District, and Downtown Arlington, Abrams Street is one of the most important streets in the city of Arlington’s history. Recognizing this, the multi-year spanning Abram Street Rebuild Project has been hard at work towards improving this iconic street.

According to the City of Arlington’s Public Works and Transportation Department, over 100,000 hours of labor have been used in the rebuilding and reimagining of Abram Street. The Abram Project has been divided into several phases over the last few years, which have included the installation of new water and sanitary sewer lines and the logistics of the road itself, reducing 5 lanes of traffic to only 3. In addition to this, improvements to the street and the surrounding area have included building of wider sidewalks, on-street parking, ADA compliant access ramps, pavers, landscape beautification, bike racks, benches, decorative light fixtures and much more.

The construction has presented some difficulty for daily commuters along Abram and adjacent streets who have been forced to drive much more carefully around the area over the last few years. Businesses located along Abrams have also been inconvenienced during this time due to the difficulty customers face in trying to park at their favorite restaurants and other businesses. However, the projected benefits of the new infrastructure, as well as helping to eventually increase accessibility between Abrams and UTA are sure to be worth the temporary inconvenience. After all, bringing the UTA community closer to City Hall, the Arlington Public Library, Levit Pavillion, and new businesses like Inclusion Café and Rita’s Italian Ice is vitally important to the future success of Downtown Arlington.

Leaders behind the Abrams construction have taken direction from Charles Marohn, founder of Strong Towns, a non-profit organization that helps American cities become more successful. As Marohn, a Professional Engineer (PE), explains it, a road works to move people from one place to another as quickly as possible. Typically, this is achieved by designing a thoroughfare with many wide lanes in both directions and with a higher speed limit. However, a street should be more focused on “creating and capturing value”. An effective street works using less traffic lanes, of which are not as wide, provides wider sidewalks, and uses slower speed limits. The purpose of this is to create more emphasis on the businesses and establishments that exist along the street. By allowing pedestrians to feel safe walking around the city, without fear of cars speeding by as often or as fast, residents can happily patronize their favorite local businesses.

Marohn has coined the term “stroad”, which he uses to describe Abram Street in its previous form. According to Marohn, a “stroad” is a street/road hybrid which Marohn compares to a futon. “A futon is neither a comfortable couch or bed. We have our very own “stroad”, right here in Downtown Arlington.” A “stroad” unsuccessfully attempts to achieve the best of both worlds – create a quick way for cars to get from one place to another without many stops while also being home to local attractions, restaurants and other businesses meant to be stopped at and visited. This results in fewer businesses along the street which are further apart from each other, and are less frequented as a result, and sacrifices the connectivity that a “downtown” should provide.

Although many Arlington staples exist on Abrams Street, including J. Gilligans, Old School Pizza Tavern and J.R. Bentleys, the street itself has lacked focus on bringing attention to these businesses. With the attributes of a traditional road in place (many wide lanes of traffic and high-speed limit), it is not uncommon for Arlington residents to simply drive past these establishments on a daily basis, only visiting them on rare occasions. By reducing the number of cars on Abram Street, focusing on creating a more pedestrian-friendly downtown, improving public works and investing in landscape beautification projects, Arlington leaders hope to facilitate the future growth of Downtown Arlington by encouraging more residents to spend time on Abram Street, not just drive through it.

Arlington is a small-town city at heart with high potential to escape its “mid-city” reputation. Fostering the growth of Downtown Arlington will be an essential step in doing this and the re-engineering of Abrams Street will surely start us off on the right path. As Tom Cravens, recipient of the Downtown Arlington Management Corporation’s Dream Builders awards once said, “Abram must be a street to get TO Downtown Arlington – not THROUGH Downtown Arlington.”

Where to Find Girl Scout Cookies in Arlington, Texas

Dog Haus in the Arlington Highlands to host food drive