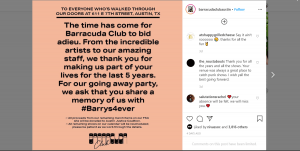 Music is a part of many people’s lives. From rock and roll to country, we all enjoy watching our favorite artists perform or listening to our favorite songs live. If the local music scene ceased to exist, it would strip a big part of the entertainment and culture in cities all over the country.

The live music scene has been hit hard. Because of the economic turn, these places that once had crowded shows are now at risk of never opening their doors again. Music venues have been trying to stay in business by offering takeout food and live streaming concerts.

Concerts are not only a great source of entertainment, but they are important to those who put the show together, the musicians, and the music fans. Music venues create jobs and therefore are a part of our community and economy.

Upcoming artists can usually be found playing in small stages including bars and clubs as well as local venues. In Arlington, bars that have live music include J. Gilligan’s, Mavericks Bar and Grill, and The Grease Monkey. Artists are worried about their career and for the future of the local venues they once played in. This is why it is important to support these places and raise awareness on the matter in any way we can.

Larry Gee, a musician who performs in the Dallas area, is one of many artists pouring out their frustration on social media where their voices can be heard. On May 8th, Gee posted on Instagram letting others know that if there is enough funding from the government, it can help save local venues. He also directed followers to the website https://www.saveourstages.com/, where people can get information on the issue and send an email to senators and representatives. The website was put together by the National Independent Venue Association, which consists of various venues across the country that are trying to get the attention of those in Capitol Hill to help provide funding.

When asked why small music venues matter, Gee stated “Local music venues define and enrich our community…Local venues also give opportunities to independent artists such as myself to share our music by putting us on a bill or actually letting us headline a show…”.

Music venues are trying their best to stay afloat in these times. Along with artists, music venues have posted on Instagram and Facebook letting people know why it’s crucial to help out. Among them were the Granada Theater in Dallas and Main At South Side in Fort Worth who posted about the Save Our Stages website. On a Facebook post, the Dallas venue Club Dada wrote, “…While completely shuttered we have no revenue, our employees and artists are without jobs, and normal bills keep coming, regardless…”.

The slow reopening of businesses has not helped these music venues much since the capacity limits do not allow for enough to cover expenses or to earn profit. As a result, many venues have not been able to continue. This was the case for the independent venue, Barracuda Club in Austin, TX who recently shut down permanently. They bid farewell on their social media accounts and stated that proceeds made from their remaining merchandise would be donated.

Even so, music venues like the Arlington Music Hall have slowly been opening up once again. After announcing they were rescheduling shows, Arlington Music Hall opened on June 5th at 25% capacity for its first concert since the pandemic featuring cover band Texas Flood.

Music lovers and non-fans alike have options to support their local music venues, such as:

I have been going to concerts for a long time and it is saddening to think that some of my favorite venues might not be able to survive the current crisis. Many feel the same way but if our communities can come together and support music venues, they have a better chance of securing a future.

The Arlington Museum of Art reopens with Knox Martin exhibition

Dog Haus in the Arlington Highlands to host food drive