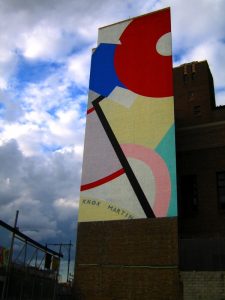 The Arlington Museum of Art has been providing the community with art since 1991 by the combined support of those including The Arlington Art Association and the Arlington Independent School District.

The museum has finally reopened after months of being closed. For the first time since February, they have opened their doors to visitors to enjoy the colorful work of world-renowned artist Knox Martin.

Knox Martin is a successful painter, sculptor, and muralist from Barranquilla, Columbia. He served in World War ll before attending the Art Students League of New York in 1946. Knox had his breakthrough when Charles Egan asked to have a one-man show of his work in the Charles Egan Gallery. Since then, he has had exhibitions all over the world, won awards, and taught art to others. Today, he still works and resides in NYC.

Martin is known for having his paintings on walls around New York City, such as “Venus” and “The Whaling Wall”. “Venus” is one of his best-known murals which was placed in a 12-story wall in Manhattan. Martin explains that in “Venus”, the red arc represents a lady’s hip, the pink on the side can be flesh or drapery, the yellow depicts a celebration, the blue is a woman’s eyes, and the black diagonal line is a tragic contrast literally and metaphorically to the rest of the light-colored painting. The Whaling Wall represents the killing of whales by humans which has caused them to decrease in population over time. Martin wanted to bring awareness of the issue from this painting, which is why he had it placed as a mural in New York. His murals have also been placed in other states such as Florida and California.

The museum exhibit showcases decades of Martin’s work such as the SHE series and WOMAN series. The exhibit has large paintings including the biggest piece, “Rubber Soul”, standing at 103 3/4″ by 139″. The 9 pieces in the WOMAN series show a different art style of Martin, consisting of black, white, and a bit of color along with a textured look. In contrast, the SHE series paintings are colorful and one-dimensional. Visitors can also expect to see an exclusive watercolor series from Martin that is being shown to the public for the first time.

The museum opened its doors to Knox Martin: Living Legend on July 18 and will continue through October 11. Tickets are $10 for adults and $5 for seniors, students, and children over 12.

Safety precautions for visitors include:

To help the Arlington Museum of Art continue to bring exhibitions like this one, residents can get involved by donating directly or becoming a member. Volunteers over 15 years of age are always encouraged for gallery openings as well.

The beauty of art is having it be interpreted in many ways by each person who sees it. Going to see an artist’s work, such as that of Knox Martin, can surely be appreciated by Arlington residents of all ages.