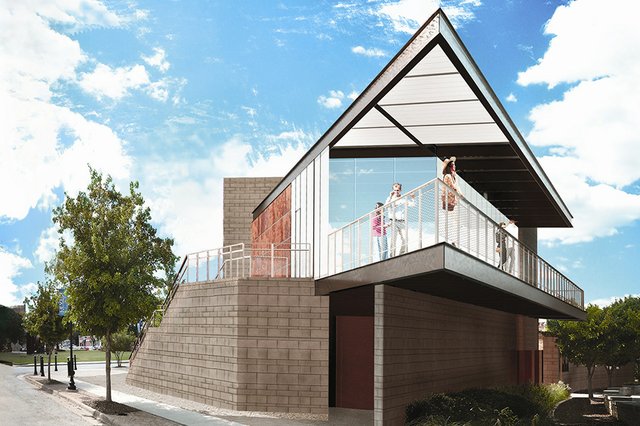 Construction on the Levitt Pavilion Arlington Hospitality Center is over halfway complete after initially breaking ground back in August 2019.

The new Hospitality Center will be named after one of its biggest donors, the Baylor Scott & White Orthopedic & Spine Hospital, who donated $750,000 to the project. Another large donor is the Arlington Tomorrow Foundation who gave $500,000 to the initial fund. Alongside these donors, the Levitt Pavilion also received donations from local Arlington residents.

Originally, the building of the Hospitality Center was planned to be in sync with the Abrams Reconstruction Project and were meant to be finished at around the same time. The completed Hospitality Center, in combination with the new and improved Abrams and the newly opened businesses along the street were hoping to be the start of a new era for the Downtown Arlington Cultural District. However, due to some delays and the unprecedented effects of the COVID-19 pandemic, the Hospitality Center’s final date of completion is yet to be determined.

One of the most significant reasons for the building of the Hospitality Center is to provide bathrooms at the event space. Since the beginnings of the Levitt Pavilion, a common complaint from guests has been that permanent restrooms are not available. Portable toilets have been available for event attendees in the past but were only meant to be used temporarily. The Hospitality Center will be the location for the Levitt’s permanent bathrooms, which will include family bathrooms and accessible stalls.

In addition to the permanent bathrooms, the Hospitality Center will include a private suite capable of fitting up to 100 guests. The private suite will be named after one of the Center’s donors, the Arlington Tomorrow Foundation. The suite will be available for private events, meetings, and parties. In addition to its own bathrooms and kitchen, the suite will also provide access to a large outdoor deck that provides an ideal view of the Levitt Pavilion stage.

The concerts at the Levitt have included everything from local bands to Grammy-award artists such as Kenny Loggins, Pentatonix, and Snarky Puppy. Since 2008, the Levitt Pavilion has hosted a free concert series every year. The 2019 concert series featured artists like The Polyphonic Spree and Reverend Horton Heat. In addition to the free series, Levitt Pavilion also hosts a yearly benefit concert. Previous benefit concert featured acts have included .38 Special, Barenaked Ladies, and Starship. Along with concerts, the Levitt also hosts a yearly free summer movie series, which began in 2016, which focuses on family-friendly movies.

The Levitt began its first ever Living Room Series, which livestreams musical performances every Tuesday until August 28th, bringing the concert experience to your home. The Living Room Series provides a way to enjoy live music while remaining safe.

The Levitt hopes that the Hospitality Center will make guests feel welcomed and comfortable when they attend events. Once public gatherings become safe again, the Levitt Pavilion will resume being a site of exciting events and festivals. With these new additions and growing list of events planned for the future, the Levitt Pavilion is sure to earn its place as Downtown Arlington’s cultural centerpiece.

For more information about Levitt Pavilion and its events, please visit https://levittpavilionarlington.org/events/